Event apps, are they worth your budget?

Live events are all about connecting people. From speakers and their audiences, to business networking, to new recruit onboarding sessions. Every event planner may have their own style and way of doing things, but there’s one thing that we all agree on:

It’s a HUGE job coordinating everything.

With so much going on, event planners are dying to get their hands on something that can help save time. That's why we're here to answer the question: Is an event app worth it?

After extensive research, we've managed to narrow the benefits down to 3 main points (don't worry, they're definitely worthy).

A large part of organising an event is getting top management to approve it first. With the advent of big data and data analytics, it’s both easier and harder to justify your event to your boss.

On one hand, newer, quantifiable ROI metrics are now available for the numbers-oriented bosses - attendance rates, engagement scores, Net Promoter Score and more. On the other hand, you need to find the time to collect and collate this terrifying amount of data into something easily consumable.

Did we mention 22-hour days?

Perhaps you’re planning to tackle that post-event when things are less busy, but that would depend heavily on your current workload. For event agencies and other event-heavy corporations, it’s very likely that you won’t be getting any spare time (or sleep).

With an event app, you can record the number of registrations and check-ins. You can also go further and rate each guest’s level of engagement according to how many posts they create or react to, the number of polls answered, quizzes submitted, photos taken and so on.

You can even collect surveys through the app itself! (At a 10x response rate!)

The best part? You won’t need to trawl through a mountain of papers and bad handwriting to collect those numbers.

Speaking of papers, one of the earliest and most well-known benefits of an event app is its ability to cut down printing costs...or do away with it entirely.

That’s right - depending on the needs of the event, you may actually not need to print a single sheet! With online schedules, information pages, email and push notifications and in-app note-taking, you might have just found a way to save a huge portion of your budget.

Of course, you need to compare that to the cost of the app itself but here are some quick numbers:

Want to know more about how event apps reduce costs? Find out in this post.

Arguably the new best selling point of event apps, engagement is an old problem with a new name. Event participation rates have always been a concern for event planners, however with the onset of technology and social media, things like impressions, reactions, posts and shares were added to the mix.

But before we discuss the worthiness of event apps, let’s look at some interesting stats:

Psst, did you know: A whopping ⅔ of mobile users report distress on being separated from their phones. (Left at home, battery died, etc)

Speaking of stats, have a graph: 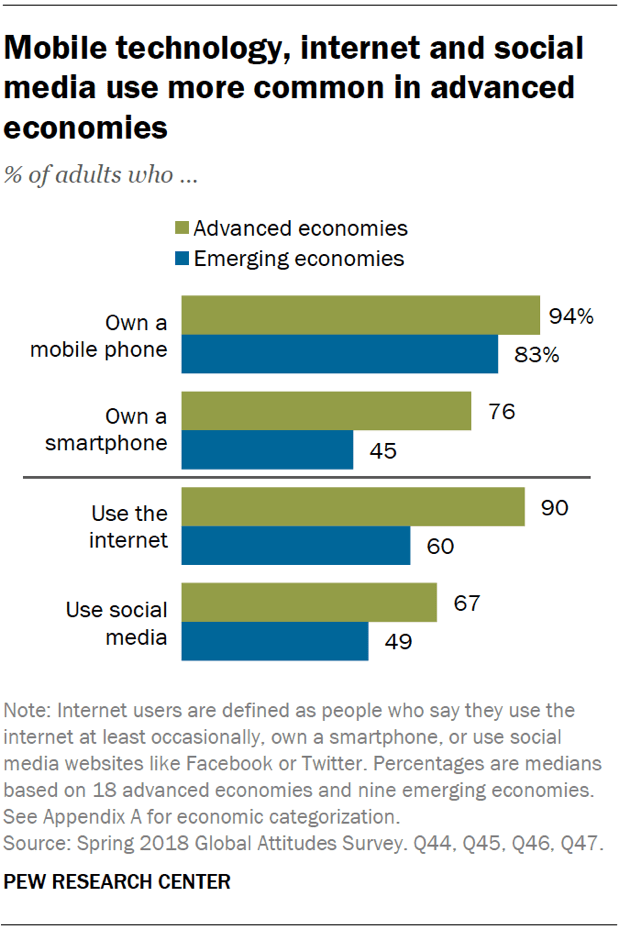 What do these numbers mean for me?

As seen on the graph above, 76% of adults in advanced economies and 45% of emerging economies own a smartphone. What this means is that a growing majority of the world’s population has access to internet on the go. Whether it’s to play games, check their email, or watch cat videos - they’re all doing it on mobile.

The most efficient way to connect people is through a medium that they are not only familiar with, but that they use frequently. Studies have shown that smartphone users use an average of 10 apps a day, 30 monthly.

The gist? People are now more willing to download and ‘try’ apps than ever.

Are event apps worth it?

Yes! We definitely believe that event apps are a worthy investment.

However, be sure to weigh the costs. Event apps are not cheap (pre-built template apps cost somewhere between $1,000 to $10,000 while enterprise app can go to upwards of $50,000!), so remember that the more events you have, the greater the ROI.

Live Streaming Integration For All Your Virtual Event Needs

Event Apps: How the Stats and Figures Underline Their Importance to Event Success

8 Must Have Features For Every Event App

5 ways an event app can help you reduce event costs

Please log in again. The login page will open in a new tab. After logging in you can close it and return to this page.